My husband & I have always seen a lot of wildlife in our backyard.  We’ve had bunnies, racoons, deer in the field behind us once, birds of all sorts, chipmunks, squirrels… you name it & we’ve likely had it.  This week, however, was really a week for animal watching.  It seemed like every day I was pulling my camera & zoom lens out to snap photos of our latest backyard visitors!

Early in the week, I saw the possum.  Colin has yet to see the guy as he only seems to come out when I am around.  I missed getting his photo but I’m not too sad about that because he is big & fat & ugly.  Have you ever come across a possum that was cute?  I don’t think so.  I’m afraid he may be the culprit who digs up around our shed, but I have yet to catch him in the act!

We have a number of bird feeders throughout our yard & we tend to refer to the birds around here as little piggies!

Some weeks, I think they could eat us out of house & home the feeder is emptied so quickly. Cardinals & Blue Jays are regular visitors to the feeders around here, both male & female.

Well, since then its been a free for all here!  Even the squirrels & a bunny were hanging around underneath the feeders to pick up those seeds tossed out by the birds. 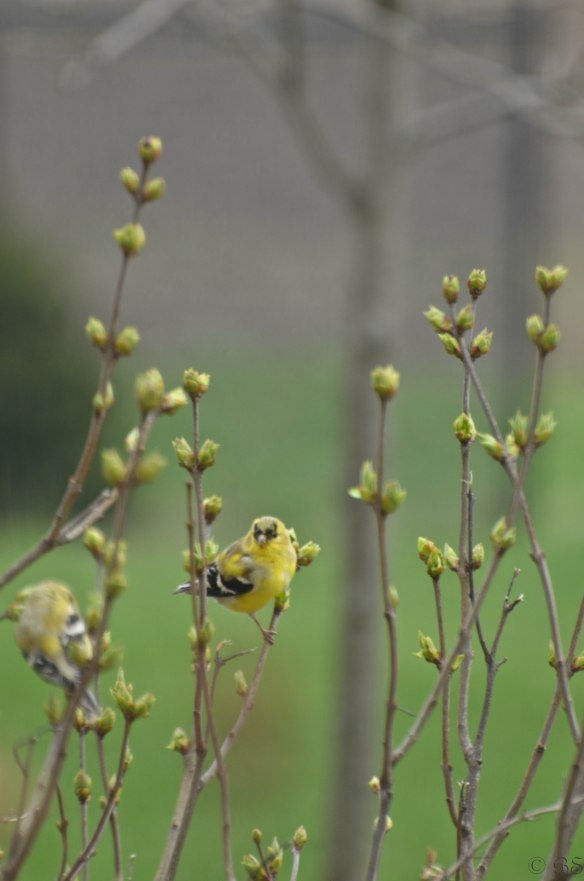 The yellow finches with their bright feathers seem so cheery, a sure sign that spring is on its way.  I am also looking forward to putting out the oriole & hummingbird feeders! 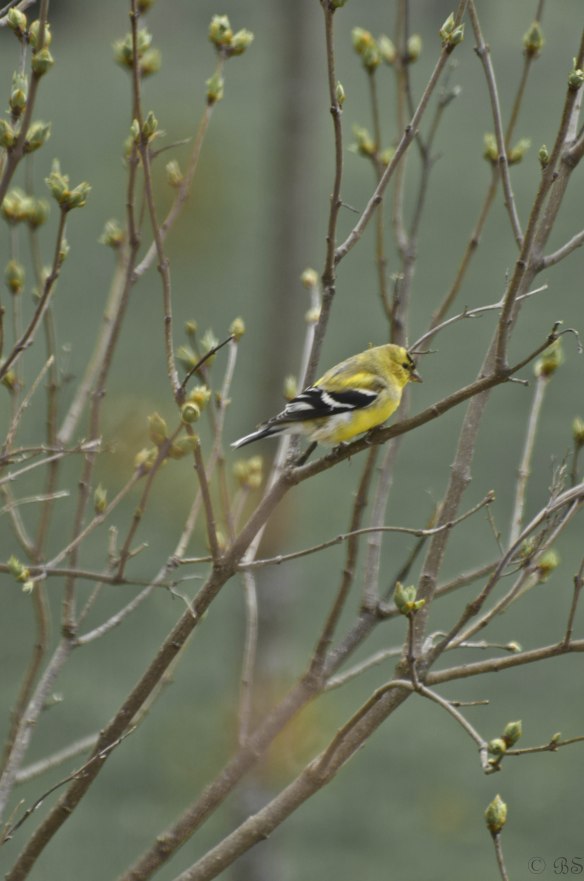 We also have a woodpecker who I hear tapping away on the trees although today I caught him tapping away at the ground.  It looks frozen little guy – you had best try somewhere else. 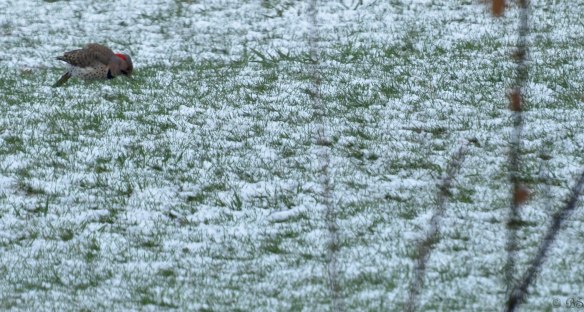 One day this week I came home to see a coyote roaming the field behind the house.  He was walking up & down the hedge line like there was something in there he was trying to get.

Coyote’s are not a usual sighting around here mind you.  I think I’ve seen one once before & heard them a few other times. 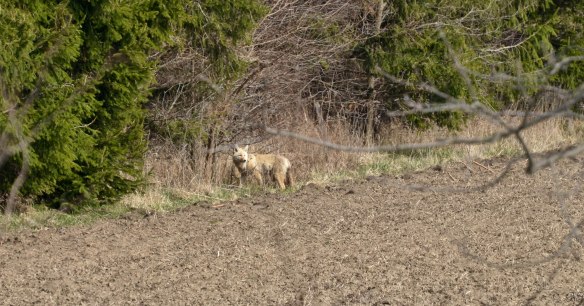 The coyote actually worked to my advantage in the summer.  The nephews were coming for the weekend & wanted to camp out in the backyard.  Colin wasn’t going to be home & I wasn’t real keen on setting up the tent & sleeping out there with them that particular night on my own. So, I told them I had heard the coyote out behind the house.  Well, that was enough to ensure we were sleeping inside!

Our visitor this morning, however, is one we have never had before.  I almost missed him in fact because he was blending in with the rock he was sitting on.  Our friend this morning was a little owl.

Now, Colin would probably correct me when I say “little owl”.  He doesn’t think the owl is so small, but what do I know?  I am not an owl expert.  He looks small to me.  And very cute. 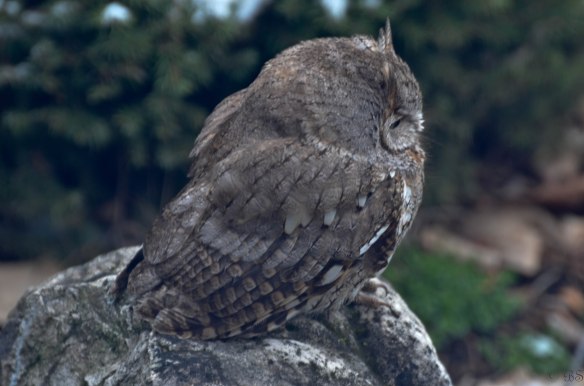 He has perched himself on a rock outside of our bedroom window & really, I don’t mind him being there.  Perhaps he will stop all the other birds from flying into our windows…. which happens on an all too frequent basis!  Colin & I were standing at the window looking down at him, me snapping photos & he looked right up at Colin.

Our new little buddy has us worried though.  We do not often see owls around our property & certainly never this close to our house.  He’s been sitting in the same spot now for around 5 hours.  He hopped over & positioned himself in the sun, but we’re worried that maybe he’s hurt or something.

We have called a wildlife rescue to see how we should proceed.  Hopefully the little guy will be alright as he sure is cute!