Impossible apple pie?  What is that, you ask?  Well, it’s nothing… just plain old apple pie… my point is that making pie from scratch doesn’t have to be impossible.  These days, it seems to me that a lot of people shy away from making pie… from making any desserts… maybe even from cooking in general.  Things are definitely not the same as when my grandparents were young, that is for sure.  Yet this is exactly where I learned to make pie – from my grandmothers.

My Dad’s mom (my Grandma – Gram for short) always made the best raspberry pie, my Dad’s favourite.  Gram could make other kinds of pie as well but raspberry was her specialty.  While I am sure I likely helped my Gram make pie at some point during my childhood, I would say that I get my pie making skills from my mom’s side… from my Nannie. 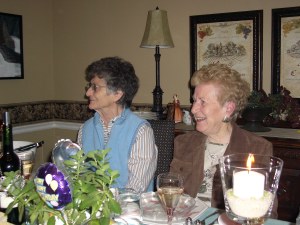 Nannie in Blue & Gram in Brown

Nannie used to make the best pie.  Apple, pear, raspberry, peach, blueberry… you name it, my Nannie made it.  I always joke that while I didn’t get my Poppa’s green thumb, I definitely got my love of cooking & baking from Nannie.  Growing up we spent a lot of time with our Nannie & Poppa, whether at their house or at ours & my brothers & I have a ton of fantastic memories.  While we did a lot of fun things with our grandparents, we also spent a lot of time in the kitchen… me perhaps more than the boys, but I know there were times that all three of us were in the kitchen with Nannie.  Chocolate chip cookies (stay tuned for this recipe) & homemade pizza’s were probably our favourite things to make with Nan but I also remember making pie.  Now, when I talk about making pie, I am not talking about making just one pie at a time… we are talking three or four pies all at once… which Nannie would then freeze to have available at a later date.  (This is a feat I have yet to accomplish – I usually stick to one pie at a time, though I pride myself on the fact that I can whip up an apple pie from scratch in less than an hour – baking time not included!)  While helping Nannie make pies, I remember being in charge of adding the tapioca (Nannie’s secret ingredient in peach pie to help it thicken).

I will admit that I didn’t learn how to make my crust from Nannie, but I did get my crust recipe from a cookbook my Nannie gave me.  The book is old & looks like all good cookbooks should – it’s worn, the cover is tattered & some of the pages are stained … this book looks like it has been used!  How else do you know the recipes are good?  I think I stumbled across this recipe for crust by accident but now use it so often that I never pull the recipe out anymore.  There are three (sometimes four) ingredients to this crust & I have used it for years.  Now, I bet you are wondering how there can be three sometimes four ingredients.  Well, that depends on my mood.  The recipe calls for a pinch of salt but more often than not I don’t put it in.  I know there are people out there who think that salt brings out the flavour in food & makes everything taste better.  I am not one of those people.  Although I will admit salt is a welcome addition in certain foods, I’m not convinced it’s needed in pie crust.  I’ve made the crust with salt & without & honestly can’t taste the difference (and I’ve never had anyone tell me they could taste a difference either!) so I usually just leave it out.  The other trick to my crust is that I find it turns out better when the shortening is at room temperature. Now, for those of you who are pie makers, I know this goes against what a lot of recipes tell you.  They usually tell you to use cold shortening or butter or whatever it is you are using… & you can do that with this recipe, I just find it turns out better at room temperature.

Okay, okay… I’ll get to the recipe… in a minute.  First let me tell you one of my favourite reasons to make pie, apart from the fact that it’s just so darn good to eat.  I love to make pie with fresh ingredients.  There is just something about fresh crisp apples in the fall or juicy peaches in late summer that makes me want to make pie.  It is also a huge stress reliever.  I’m not kidding!  Kneading the dough for the crust is very calming for me (incidentally making bread has the same affect!).  Now that I’ve been rambling on about apple pie I bet you want to know the specifics huh?  I will try to be as specific as I can given that I never follow a recipe.  Sometimes I find it hard to teach people how to make things or write out recipes because I don’t use them.  Somehow I just know what to do & the right amounts.  So, here goes nothing…

6 Tbsp (give or take) water

Pinch of salt (if you must)

Add flour to large bowl.  Cut shortening into small pieces & add to flour.  It doesn’t really matter how big or small the pieces of shortening are as they will get broken up by the pastry cutter.  Using the pastry cutter combine the flour & shortening.  You want the end result to look like… uh…. (I guess this is one of those instances where I should have taken a picture to show you!)… well, you just want the shortening to be in very small pieces.  If you don’t have a pastry cutter don’t worry, you can accomplish the same thing with two knives.

Once you have reached this consistency, begin adding the water.  Add a tablespoon at a time while stirring the mixture with a fork.  The dough should start to come together.  If it is too dry, add more water.  If you’ve added too much & the dough is too wet, add a little more flour.  Once the dough becomes tough to stir with a fork, get your hands in there & get dirty!  Mix the dough until a ball forms.  On a lightly floured surface, knead the dough until fully incorporated. Don’t knead for too long, however, as you’ll make the dough tough & not as flaky.  Divide your dough ball into two, one half for the top crust & one for the bottom.  Roll each ball out into a thin circle, at least 8 inches in diameter.  I prefer to roll both out ahead of time to try to help with the mess.

4-5 medium apples (I like using Cortland because the hold their shape, but any apple will work)

A few dashes of cinnamon/cloves/nutmeg

Peel & slice the apples into a large bowl.  I usually do the apples before working on the crust but it doesn’t really matter.  Once all the apples are peeled & sliced squirt a little lemon juice on them (especially if you opted to do the apples first so they won’t go brown).  Mix in sugar.  Use 1/2 cup if you like your pie on the tart side (as I do) or 3/4 cup if you prefer it a little sweeter.  Stir in 1-2 tbsp flour to help your pie thicken.  If it doesn’t look like enough, add a little more.  I never really measure… just guess.  I almost always add a couple dashes of cinnamon to my pie & sometimes I add nutmeg & cloves as well, but it’s entirely up to you.  Make sure the apples, sugar & flour are mixed thoroughly.

Preheat oven to 425 F.  Place one of your dough rounds in bottom of 8 inch pie plate.  The dough should slightly overlap the rim of the pie plate.  Use your knife to trim off any excess dough from the top of plate.  Add the apple mixture smoothing out the apples on the top.  At this point some people would add a few spots of butter before placing the top crust.  I never do, but hey, it’s your pie!  Take your second pie crust & place over top of the apples.  Once again trim off the excess.  You now want to make a seal between the two crusts.  Using a dish of water, brush a little water on the top edge of the bottom crust & the press the top crust into it.  Think of it like gluing together two sheets of paper.  If you want to fancy up the edges, go right ahead.  I am not even sure how to best describe the technique of making the ruffled edges like in my photo.  So if you want the easy way you can always score the edges with a fork.  You will want to make a few slits in the top pie crust to let the steam escape.  If you have extra dough you can cut out small shapes to add to the top (as I have done with leaves here).  Pat the top of your pie with a little milk & then sprinkle with sugar.  This will help your pie get nice & golden brown.

Place pie in 425 F oven for 12-15 minutes until the top starts to brown slightly.  Reduce heat to 350 F & continue baking for another 45 minutes or so.  You may want to place a baking sheet underneath your pie to save your oven.  Apple pies are known for boiling over & making a mess!  If using a glass pie plate  you will be able to see your pie is done by the golden colour on the bottom crust.  If can’t see through your pie plate, not to worry, the top crust will also be golden brown when the pie is done.

Although there is nothing better than warm apple pie, you will want to let the pie sit a little bit before cutting into it & serving up a slice.  If you allow the pie to cool slightly it will maintain its shape much better when you cut into it.  All that is left to do now is grab a fork & enjoy! 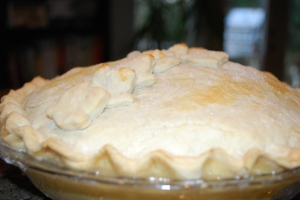